After Christmas the winds blew hard almost every day. Frosty the Snowman tried hard to battle the winds outside. He wanted to continue to point to the location of the train garden but mother nature won. As a result Frosty the Snowman was injured. Bernie Deasel and Frank Bratkowski decided to operate on him. He may need a few more minor surgeries but all looks good for a complete recovery. 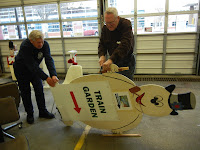 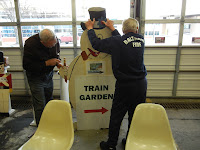 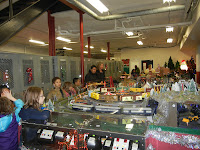 796 students from seven area schools visited the Train Garden from Monday, December 17 to Friday, December 21. The students and their teachers and any accompanied adults thoroughly enjoyed the garden. The students had fun doing the scavenger hunt.
at 5:41 PM No comments:

﻿﻿﻿﻿  All members of the Morningstar and Obara Families greatly enjoyed their visit to the Train Garden.﻿


On Wednesday, December 12, 2012 Girl Scout Troop # 5347 from Patterson Park Public Charter School under the leadership of Ms. Allison Fomich visited Fire House # 41. There they heard a presentation about fire safety and the duties and the responsibilities of firefighters. After the presentation 22 girl scouts with their 6 chaperones toured the train garden. They so much enjoyed it that many did not want to leave.

As a result of Jacques Kelly's article hundreds of visitors flocked to the Train Garden. All were impressed by the variety of displays that make the garden a community train garden. Many visitors wanted to thank all the volunteers that worked on the garden and said they enjoyed themselves greatly. Thanks Jacques!
at 6:38 PM No comments:

On Friday, December 7, 2012 the Sun newspaper writer Jacques Kelly, a train garden enthusiast himself, visited the Highlandtown Train Garden. He liked how this garden is a community event. For example, those businesses or associations who donate money or make in kind donations have their names and logos placed on buidlings and billboards inside the garden. Mr. Kelly especially liked the near miss figure eight. Bernie Deasel, one of the train garden's engineers, reminisced with Jacques about how they became involved in train gardens. Also, in the picture below, is Chris Ryer, executive director of the Southeast Community Development Corporation, who greatly supports the train garden in a variety of ways. 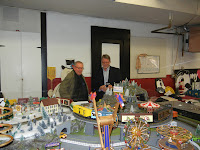 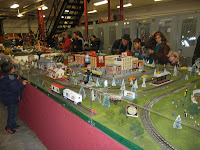 On Friday evening November 30 after lighting the Christmas tree at Conkling St. and Eastern Ave. Mayor Stephanie Rawlings-Blake and a large group of people walked over to the train garden. After a few speeches and acknowledgements the mayor pushed down on the start button on the remote and the train garden was lit and the trains were on the move. An exciting time was had by all! 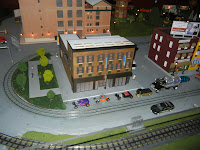 Also pictured on the right is a replica of the new Southeast Community Development Corporation building now being built at the corner of Eastern Avenue and Highland Avenue.


Thanks to our 2011 Community Sponsors! Visit their sites.