Just To Let You Know

The Highlandtown Train Garden is a handicap accessible site. BTW the last day for Santa at the Train Garden was Monday, December 23.
at 5:49 PM No comments: 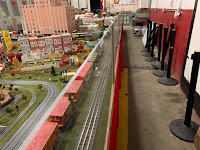 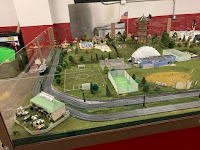 Everything has been tested and is working fine. We are awaiting for the Plexiglas and the sky ceiling to be installed this coming Friday. The Old Industrial Highlandtown display on the back table is also 99.9% complete. Here the wait is for the HO train to be tested. Visit our new web site www.highlandtowntraingarden.com.

The Library Has Arrived

Below are three pictures of a replica of the Southeast Anchor Library. The Haussner's building and the Creative Alliance (Patterson) building were relocated in the train garden. And don't forget our new web site - highlandtowntraingarden.com. 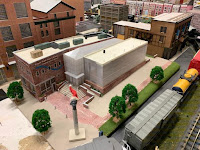 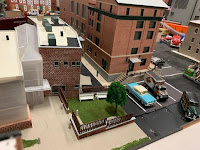 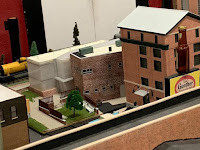 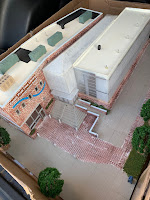 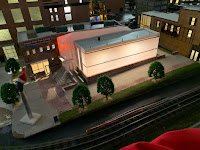 
The Highlandtown Train Garden now has a web site that is quite informative. It has the same URL as before but it takes you to the web site. Click on the URL below.
highlandtowntraingarden.com.

Lighting Up The Train Garden

On Sunday, October 27 several volunteers continued to work on the Train Garden. This day the volunteers worked to provide more lighted animated signs. Such animation is well liked by the visitors.
at 2:14 PM No comments:

Time For The Sponsor Letters

On Thursday, October 24 several members of the Train Garden Committee met to stuff and stamp the letters that will be going out to various businesses and associations. We hope that many of them will respond. These sponsorships help to finance the Train Garden.
at 2:12 PM 1 comment:

A Video By TBC, Inc.

TBC, Inc. assisted by Kenny Klompus visited the Train Garden last year and produced the following video: (Please note there is no sound on the video)

Many thanks to Jeff Jordan, Video Production and Editing, from TBC, Inc.
Also, you many want to visit their site - https://tbc.us/

Getting Ready For Opening Day On November 30

On Saturday, October 12,many volunteers worked on the Train Garden. They were Terry Maillar, Scott Eggleston, Doug Campbell, Carol Hartke, Georg Lambillotte, and Joe Manfre. Here are some updated pictures. 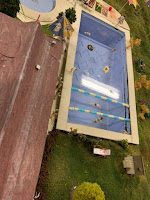 Landscaping Around The Rink And Other Parts Of The Train Garden

Terry Maillar is going to put a chain link fence partially around the Rink with ivy Yesterday, he put the sidewalk around the Rink. Joan Campbell painted that sidewalk. Doug Campbell, Scott Eggleston, and Terry landscaped the figure 8 area by filling in the roadway and the new pedestrian bike path. George Lambilottee filled in the snow where the Bump and Go Winter Trolley is. 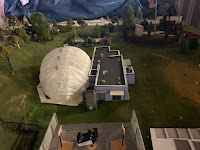 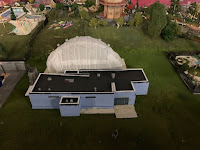 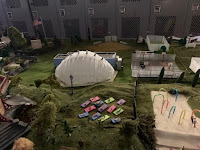 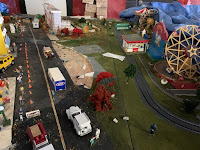 The Ice Rink Is Almost Finished

Today, Terry Maillar, Jessica Markiewicz, and Doug Campbell have completed the Mimi DiPietro Ice Rink as can be seen in the following photo. 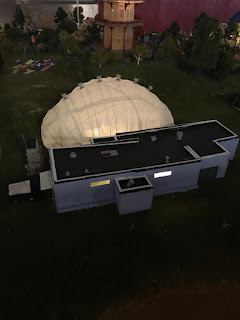 Work Continues On The Ice Rink

The Industrial Highlandtown Display Gets A New Addition 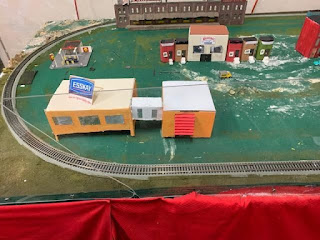 The Industrial Highlandtown Display Is Starting To Take Shape

Carol Hartke and Joe Manfre began placing industrial Highlandtown buildings in the display. More buildings will be added soon and other items will be displayed. 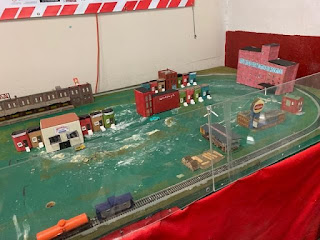 Watch The New Bump and Go Trolleys Around Patterson Park


The new display for Patterson Park are three Bump and Go Trolleys. Watch the video below.

On Saturday, August 10, 2019 Terry Maillar, Scott Eggleston, and Joe Manfre continued to work on the Bump and Go Trolley Display that will be around the Patterson Park platform. Two routes have been successful so far, and  a third route will be created in the coming weeks.
at 5:03 PM No comments:

A New Addition - Bump and Go Trolleys Around Patterson Park

On Saturday, August 3, 2019 Terry Maillar, Scott Eggleston, and Joe Manfre worked at the Train Garden to develop the Bump and Go Trolleys display around the park. Terry and Scott began to decide how to provide the necessities for this display. Joe Manfre took the pictures. Carol Hartke worked at home creating houses for the Patterson Park display.

Some Changes Being Made To The 2019-2020 Highlandtown Train Garden

On Thursday, July 4, 2019 several volunteers came to Engine House # 41  to begin working on the Train Garden. Pictured below from left to right are Terry Maillar, George Lambillotte, Scott Eggleston, Jessica Markiewicz, and Carol Hartke. Joe Manfre was also there and took the picture. 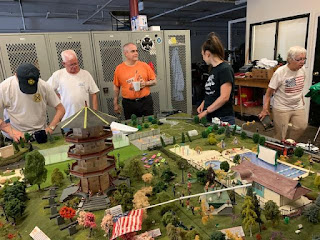 Thinking About the 2019-2020 Highlandtown Train Garden

On Sunday, March 24, 2019 several members of the Train Garden committee met to discuss some ideas for the upcoming HighlandtownTrain Garden. In attendance were Terry Maillar, Carol Hartke, Doug and Joan Campbell,  George Lambillotte, and Joe Manfre. Some of the ideas that were discussed were longer plexiglass, bumper cars around the Patterson Park, an Industrial Highlandtown display on the back table, and the calendar days that the Train Garden would be open. If interested in these or any other ideas feel free to contact Terry Maillar at etmaillar@comcast.net or Joe Manfre at joesocst@aol.com.
at 2:09 PM 1 comment:

Some Updates For The Highlandtown Train Garden

Winner of the Goetze's Basket

John Newman won the Goetze's Basket at the Highlandtown Train Garden. His ticket was drawn on January 1, 2019. He is coming to the Train Garden this Saturday to pick up the basket. A picture will be taken then. Congratulations! 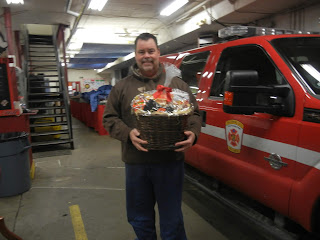 Winner of the Spice Rack

Kory Mitchell won the McCormick Spice Rack at the Highlandtown Train Garden. His ticket was chosen form the container on January 1, 2019. Pictured is Kory receiving the Spice Rack. Congratulations! 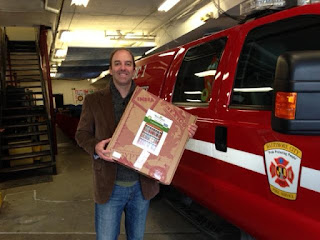 Winner Of The Two Train Sets 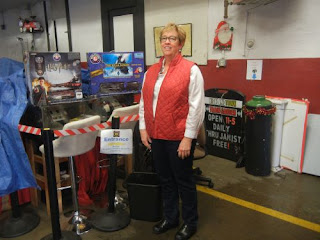 Tracy Boyd won the two Train Sets at the Highlandtown Train Garden. Her ticket was chosen on January 1, 2019  from the container. Pictured is Tracy receiving the Train Sets.
Congratulations!
at 3:11 PM No comments:

Today Is The Last Day

Today is the last day to visit the Train Garden. We will remain open to 5 pm. The raffle drawing will occur at around 4 pm.
at 10:10 AM No comments:

Thanks to our 2011 Community Sponsors! Visit their sites.